The first project CPM have worked on for GallifordTry is underway in the prestigious conversation area of St James within the city of Westminster.

The office is accessed from St. James’s Street, through a re-configured shop front of Richard Norman Shaw’s Alliance Assurance Building, 1881. Upon arrival into this new reception space one would proceed into a three storey high circulation atrium – a space uniting an existing lightwell of Shaw’s building with the re-claimed rear façade of an early 18th Century Georgian Terrace. The rear of the terrace is exposed in full for the first time in over a hundred years – earlier subsequent developments having been built up against its blank rear wall. The space will be enclosed by a glass roof, above which the new brick elevation rises. The offices themselves offer square floor plates with views over St James’s Park.

There are a number of adjoining buildings in the same ownership and this is most evident at the basement levels where a number of buildings are interlinked. Over the years BB&R have re-invigorated the wine cellars by transforming them into Hospitality and Event spaces. In a further development of this process the new basements, including a newly excavated sub-basement, of 62 & 63 Pall Mall are inhabited by BB&R’s Hospitality and Corporate Events. A new double storey hospitality space is created, with a tiled fan vaulted soffit and a mezzanine. A new commercial kitchen is also incorporated at sub-basement which re-organises existing facilities and allows the renovation and expansion of the ‘Napoleon Cellar’ at the base of the Alliance Assurance building. 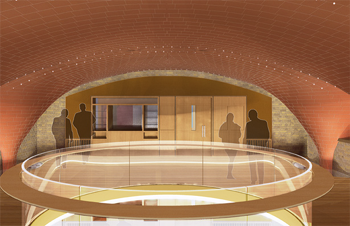 Network Rail has selected Bam Construction to deliver a new regional campus in Basingstoke
Social Media Links
This website uses cookies to improve your experience. We'll assume you're ok with this, but you can opt-out if you wish.Accept Read More
Privacy & Cookies Policy
Necessary Always Enabled